You are here:  Home » Services » Video Courses » Trading With The Tide

Trading With The Tide 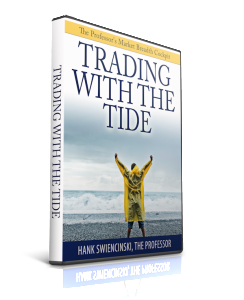 You can now access this exclusive 45 minute video and course manual.

Acclaimed Author and trader Hank Swiencinski, aka The Professor, has been teaching trading at the University of North Florida since the spring of 2009. His courses have been the subject of much acclaim in Jacksonville’s news media, the Florida Times Union, and its two major network stations.

He is the co-author of The Professor’s One Minute Guide to Stock Management, a highly informative book that addresses his straight forward, easy to learn methodology. He has conducted numerous seminars and webinars on trading and is currently the principal contributor to OneMinuteStock web site.
One of the biggest mistakes that traders make when entering new positions is to

They establish long trades when the tide is going out, and short the market when the tide is coming in. Then once in the trade, they wonder why it’s not working out. They thought the conditions were favorable. They thought they were using the right indicators, but the trade still didn’t work out. Frustrated, they took the loss and moved on to the next trade, never taking the time to understand why the trade lost money.

In this course, Trading With The Tide, The Professor will show you how he puts the odds in his favor by always trading with the tide.

How did The Professor know?

In this 45 minute video course, Trading With The Tide The Professor will show you how he measures the internals of the market.

He believes that most technical analysts and traders either don’t take the internals of the market into consideration when they establish trades or measure the internals incorrectly.

Because of this they usually lose money

Put the odds in your favor

The professor will show you the correct way to measure breadth and how to use it to put the odds in your favor. Once you see a few examples of this, you will understand the importance of breadth, and

NEVER place a trade without checking these indicators again. NEVER!

The Professor will also show you how he identifies stocks and ETFs to trade when breadth is signaling a change in market direction. You will learn how to set up your trading screen and all the decision tools he uses to enter trades and take profits.

It’s a total methodology. If you enjoyed The Professor’s previous videos, you owe it to yourself to find out how you can use these techniques to increase the odds for success in your trades. Do yourself a favor.

Sign up for the course and NEVER trade against the tide again.

With the right setup and technical analysis, these special days in the market can be money in the bank. It’s not rocket science, it’s commonsense and simple technique. If you enjoyed The Professor’s previous courses on ‘Trading The Turns’, ‘Rifle Trades’, and ‘Going to the Candy Store’, you’re gonna love this.

More about The Professor

For the last few years, traders and investors in Jacksonville, Florida have had legendary trader Hank Swiencinski, the professor, all to themselves. No longer. The Professor, as he is known by his clients, has already presented his ‘The Professor’s One Minute Guide to Stock Management’ to a selected audience in the spring.

Now he’s gone a step further and is revealing for the first time his devastatingly effective strategies outside the walls of the University of Northern Florida in Jacksonville, FL.

If you enjoyed The Professor’s previous courses on ‘Trading The Turns’ and ‘Rifle Trades’, or you’re new to his trading style, you’re gonna love this course. Your price will be only $99 (that’s way below the asking price of $299). Click on the order now.