The Dow rose 56 points on Friday, closing at 17,947.  It was down 69 points for the week.  The NASDAQ was down 32 points on Friday and down 36 points for the week.  So we’re still seeing mixed markets.  As you can see from the attached charts, money is now moving out of large cap international issues, but it’s still pretty strong for the large technology issues on the NASDAQ.  However that could be about to change.

This week, we saw several large institutional investors start to move out of technology.  Carl Icahn sold his shares in Netflix (NFLX) causing the share price to drop over 50 points from its high of 706.  The decline also caused the money flow indicator on NFLX to move below the moving average on both the Daily and Weekly Chart.  Changes in the money flow indicator on NFLX have been very reliable for predicting price movement of the stock.

So if money starts to leave the NASDAQ like it’s already doing on the NYSE, it could cause equity prices to fall.  And if the Dow falls below 17,750, it will be a major sign of trouble ahead.

The Tide and both Money Flow indicators are negative, but the Dean’s List remains neutral.  The lone holdout now is the Russell 2K.  And as you can see from the final chart, the volume measures for the IWM, the positive ETF for the Russell 2K, are still fairly positive.

This begs an interesting question, because if money is going to leave the large cap and technology issues on the NYSE and NASDAQ, where will it go?  Will it continue to move into small cap stocks?  Will it move overseas?  Or maybe it goes into Bonds or the metals?

It’s something to think about, because IF large institutional money is going to leave the major US markets, it has to go somewhere. The Big Boys don’t get paid the big bucks to hide it under a mattress or put it into CDs.

My belief is that the institutions have way too much money to move any significant amounts into small cap stocks.  The pool simply isn’t big enough for them to play in.  Besides, it’s not something they like to do.  You don’t see highly paid money managers visiting Mom & Pop businesses asking about their company.  They’re not interested!

So maybe some of the money goes overseas?  Maybe China?  But FXI, the China ETF is not looking pretty these days.  As a matter of fact, FXP, the inverse China ETF is currently on the Dean’s List.  So it’s not likely that money is going there.

I’m not gonna answer this question this week.  I want to give you some time to think about it.  I want you to do your homework.

Detectives always follow the money when they want to solve a crime.  And so it is with the markets.  Money Flow is what moves markets.  The reason a stock or sector goes up or down is because money…large amounts of money, move from one sector into another or from one market into another.

So IF money is starting to move out of large cap and technology equities, and likely cause equity prices to decline in the weeks ahead, we need to pursue the question of where will it go?  This will be the key to making money in the weeks ahead.  Forget the patterns and all the technical indicators for the moment.  I just want you to use your noggin’ and think things through.

So for the sake of this exercise, I want you to assume that money will continue moving out of the NYSE and OTC stocks, like it is doing now.  And if it does, where do you think it might go.  Like I said, it has to go somewhere.

So think about it.  Then once we can answer this question, we’ll start to develop a strategy to take advantage of it.

I’ll give you my thoughts on the answer next week.  But meanwhile I want you think about where the money will likely go.  Do this before things start to turn ugly!  That way, when a few ETFs start to appear on the Dean’s List that line up with your strategy (and convictions), you’ll be better prepared to buy and trade them.

BTW, there was a small change in the A-D oscillator on Friday, so we need to be prepared for a Big Move early next week.

Have a great weekend. 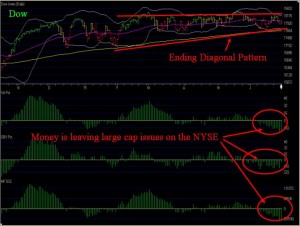 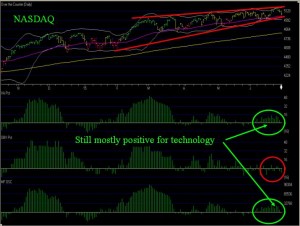 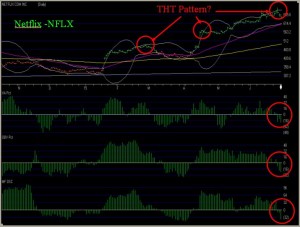 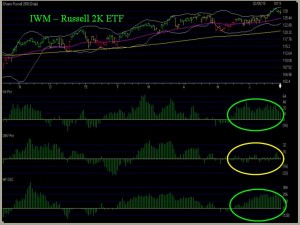