Prices on the Dow dropped over 260 points in the last 90 minutes of trading on Friday, as institutions decided not to hold stocks over the weekend.

The sell-off caused The Tide to turn negative.  So now, all of my Lists and indicators are negative.  I’m negative.

The Dow still hasn’t broken below the 17,000 level which would confirm that wave 3 down of Major wave 1 down has started, but with negative indicators all across the Board, it’s not something I want to bet against.

The Dow closed at 17,165, which on the positive side is still about 80 points from where the 200-day moving average sits.  But given Friday’s late sell-off, I would expect the decline to continue into Monday to test the 200.

Friday’s decline also caused the 35-period CCI on the Dow to re-enter the Trend Mode, so IF the 200 doesn’t hold, we will likely see additional selling start to develop.

And because Monday will be the first trading day in February, the positive end-of month bias will no longer be in effect.  As a matter of fact, we will likely see the Mutual Funds start to dump the stocks they just purchased a few days ago when they did their end-of month ‘window dressing’.

Anyhow, Monday could be a very bad day.

I originally had planned to use a good portion of this WSR to discuss the question on the dollar that Brad R. asked during my webinar on ‘Sticks in the Sand’. But after watching the market go into free fall late Friday, I changed my mind.  So I answered Brad’s question off line, basically talking about how ordinary Russians were loosing faith in their government, and how they were talking their money out of the bank ATMs and using it to buy dollars, gold, TV sets and appliances.  Anything but rubles.

We’re seeing the same thing happening with the Russian oil oligarchs.  They sell their oil for dollars.  But despite what the Russian government would like them to do, they are keeping their dollars.  They didn’t become oligarchs buy being stupid!

Brad reported that he saw exactly the same thing on a recent trip to Argentina.   He had no problem exchanging his dollars for pesos, and was getting rates from people on the street that far exceeded the ‘official’ government exchange rate.

This is what falling oil prices are doing.  Like I said in my webinar, oil and the impact it’s having on the dollar is the Big Elephant in the room for 2015.

Ok, so if I’m not going to talk about the dollar this weekend, what do I really want to talk about?  Hmmm?  Well, let’s start with some of the emails I have received during the week.  Several of them asked about what they should do (or not do) with a particular stock or ETF.  Or which ETF they should pick if the market is going down.

I ALWAYS respond to these types of questions with the same answer.  I cannot and do not provide recommendations to individuals about specific stocks or ETFs, or do I provide comments on an individual’s decision to buy or sell.  I don’t!

This is a teaching web site. It’s an extension of my Classroom. I’m not going to tell you to buy or sell a particular stock or ETF. That’s what other newsletters do. But when you rely on newsletters that just give you lists, you will never understand why you are making a particular trade. Newsletters like this are just ‘tips’. I don’t do that.

On this website, I provide you with several Lists and indicators to help you learn how to make intelligent investment decisions by yourself.  Or, IF you use a financial advisor, give you the tools so you can ask intelligent questions about what he is doing with your money.

For instance, In early January, we saw many of our indicators start to turn negative.  Back then I kept pointing these out to you, saying that it was NOT a good time to buy stocks.  What was your advisor saying?  Ok, so now the Dow is down about 900 points from its 26 December high.  What’s he saying now?  Is he managing your money. Is he taking steps to protect you?  Or is he just watching your portfolio decline? Remember, you are paying him to manage, not watch!

Also, what tools is he using to manage your money? Is he using technical indicators and Lists, similar to the ones we use or is he doing what so many other advisors and commentators are doing now…talking among themselves?  Does he have anything like The Tide? Of course he doesn’t. So maybe you ought to tell him what The Tide is doing now and what you learned in The Professor’s Class at UNF about how a market turns. Maybe you should let him borrow your book.

Not using technical tools and ‘just watching’ is exactly what happened during the crash of 2007-2008.  All of the signs were there.  It’s not like the crash came out of the blue. No! The volume indicators started to turn ugly, just as they are doing now.  BTW, I’m re-posting them again this weekend so you can see what they’re doing. If you have a financial advisor, show them to him.  Ask him what action he’s taking to protect your money. The numbers are scary!

Ok, so if you agree that the volume numbers look like something might be going wrong with the market, what can we do to protect ourselves?

Well, even though I cringed when my student asked me for a specific ETFs to trade, here’s what I will be doing.

First of all I’m going to lighten up. Right now the only stocks I’m holding are energy related. And with March only a month away, I’m still very interested in energy. I’m holding my energy stocks as long as the PT indicators remain Green.

However, now that The Tide has turned negative and is supported by the Dean’s List and the PT indicators, I’m going to start looking for a few inverse ETFs to trade.  I want to use inverse ETF now instead of shorting stocks because they a bit more conservative for my purposes.

So I will start by going to the Dean’s List and picking high rated inverse ETFs and using the P-volume as a screen.  For instance, right now DXD, the inverse ETF for the Dow is currently on the Dean’s List with an RS rating of 4.  It is currently showing positive divergence on the P-volume.  It’s also coming off a TLB pattern with Green PT indicators.  DXD is definitely a candidate.

Same for QID, the inverse index ETF for the Nasdaq100 tracking stock, QQQ.  It’s also showing positive divergence on the P-volume.  But if you look at the Dean’s List, you will see that QID has a RS rating of 2.  This is likely because Apple (AAPL) is fairly strong now, and is one of the dominant forces behind the Nasdaq. So If you choose QID over DXD, you’re gonna have to fight Apple.

Also, the reason I have been talking about the dollar lately is because it is mostly impacting the large cap internationals.  We saw how Caterpillar, Microsoft and the Big Banks got hammered this past week.  It’s because a strong dollar makes them less competitive overseas.

And even though TWM, the inverse ETF for the Russell 2K, is on the List with a #2 RS rating, the P-volume is not showing positive divergence.  Actually, it’s still negative.  This tends to confirm what I have been saying about the dollar, and its impact on smaller companies.  Most of the smaller companies on the Russell 2K do not do a lot of business overseas, so they are less impacted by a strong dollar.

Anyhow, you get the point.  The Dean’s List will always tell you where the strength is.  And right now it’s telling me to be wary of international companies that rely on foreign markets for their sales and revenue. It’s also telling me to stay long the dollar and short the Euro as UUP and EUO remain on the List.

EEV, the inverse Emerging Market ETF, had a nice pop on Friday.  The ETF appears to be completing a wave 2 pullback and is now in an Uptrend.  It too is currently showing nice positive diverging P-volume.

I’m still watching gold from the sidelines.  I don’t see anything special about the P-volume on any of the gold ETFs I’m looking to trade.

BTW, IF you do decide to put your foot into the water on Monday, just remember that the Dow is still in an Uptrend.  The 50 is still above the 200.   So with an inverse ETF like DXD that is just coming off the bottom, remember the rules.  As long as an inverse stock or ETF like DXD is still in a downtrend, the most that can be invested is a half position.  Full positions can only be taken once the ETF starts to move into an Uptrend (50>200).  Until this happens, the position is only a trade.

Have a great weekend.

BTW, IF your financial advisor has NOT called you recently, I would strongly recommend that you talk with him very soon. This is NOT the time to be shy about using the telephone. 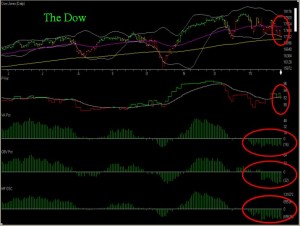