Yesterday’s rally caused The Tide to turn positive.  However the Dean’s List and both Coaches remain negative.  So the indicators are mixed which is what normally happens in a typical wave 2 retracement.

Remember, this current wave 2 retracement is likely only a minor corrective wave within wave 3 down.  As long as this retracement rally stays below the 23 March high of 18,206, I will continue to go with the scenario that says the market topped on 2 March at 18, 289 and that everything since has been a series of waves that are part of a new Bear Market.

Today marks the end of the very Bullish end-of-month, end-of-quarter, time period.  It is not unusual to see the market reverse course during the first few days of the new month as the mutual funds complete window dressing their portfolios.

However IF the market does start to pull back during the next few days, we need to be careful about getting to short to soon.  That’s because even though yesterday’s rally was strong, wave 2s usually have an a-b-c  pattern to them.  And yesterday’s rally was impulsive.  There was no significant pullback.  So IF the market does start to pullback in the next few days, there is a good chance that it will only be the ‘b’ wave with another wave up (wave ‘c’ up) to follow once ‘b’ is complete.

I will be looking for three things to happen before I get seriously short.   The first is The Tide.  I want to see it turn negative, or at least neutral.  I do not want to be buying a lot of inverse index ETFs until The Tide turns.

Also, even without The Tide or The Professor to help, what I need to see now is downside impulsive action.   If wave 3 of 3 down is going to start in the next few days, the downside action MUST be impulse.   You’ll know.  And it will be my signal to get short.

But right now, I’m just testing the waters with a few transportation stocks.

In my mid-day Update, I talked about the transportation sector and two stocks that I was watching as potential shorts.  The reason this sector caught my eye is because several transportation stocks have recently appeared on the Honor Roll.  And in the past, whenever this has happened, it was something worth paying attention to.

So yesterday, when CNI turned negative on the 5s, I shorted a few shares.  One of the reasons I did this is because all of the PT indicators on IYT, the Transportation ETF, are negative.  Also, IYT is no longer on the Dean’s List.  So there is NO high cover for the transportation sector.  The transportation ‘Stick in the Sand’ is gone.

BTW, if you look at a chart of IYT, you will notice that a nice 10-point stick has formed.  This tells me that IF the ETF starts to breakdown and falls below its 200 day moving average this time, it could be the start of a substantial decline.

So this morning I’m continuing to watch the railroads, LSTR, and AXP for a potential breakdown.  In a major decline, not all sectors start to decline at the same time.  The weaker sectors move first and usually provide a few early trading opportunities.

Watching transportation on the 5s. 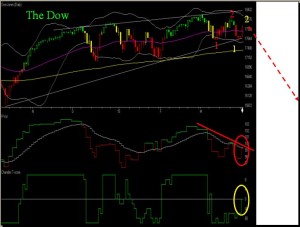 Not sure of the terminology we use? Check out these articles

The Hockey Stick Pattern
The Creation of Waves and Trends
FAQ